Book Review: Tubes: a Journey to the Center of the Internet

Andrew Blum took his Internet service completely for granted until one day a squirrel chewed through a cable in his neighborhood, cutting off his access and sending him around the world, attempting to answer the question: What exactly is the Internet? What is it made of? Where is it, really? He documents his travels in the book Tubes: a Journey to the Center of the Internet. 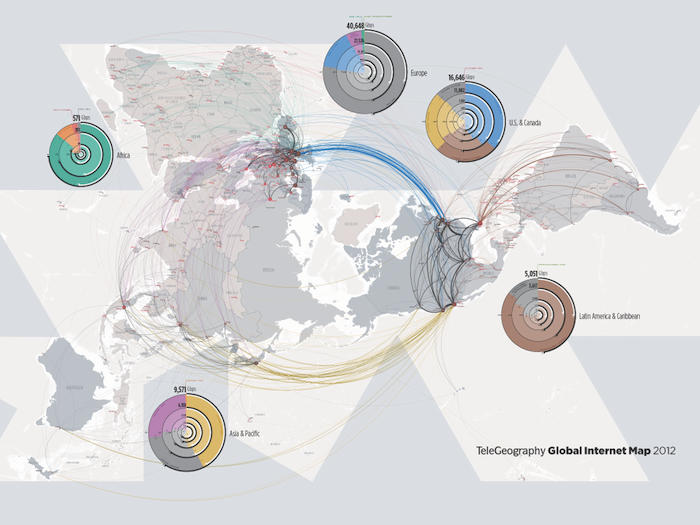 Blum starts out describing a map of the internet (note: not this other map of the internet) made by a company named TeleGeography, which shows an incredibly intricate web of little lines connecting major cities around the globe. These lines are fiber optic cables, running over land and under oceans, hooking up with each other in giant data centers in places like Ashburn, VA and London, UK. Blum goes to these interconnect points and talks with the people who run them, the people who started them back in the early 1990s when the Internet was just getting going. The book concludes with a trip to Prinville, OR to see one of Facebook's newest data centers, an example of where all the data that traverses these fiber optic lines ends up.

Prior to reading Tubes I had a pretty good understanding of some of these topics. For example, Neil Stephenson (author of some of my favorite books) wrote an amazing article for Wired Magazine in 1996 where he travels around the world following the building of FLAG, a state of the art (for the time) 26,000 kilometer undersea cable. Tubes did have a lot to say about how the early days of the commercial internet came about, though, especially with regards to the early Internet exchange points in Washington DC, San Jose, and London. Also, I had no idea that there was such a huge facility in Ashburn run by a company named Equinix. Blum goes into a lot of great detail about the history of these companies and the people that run them.

Overall I think Blum does a good job communicating that the Internet really isn't a thing so much as an idea, very much made up of the people who design and build out the fiber optic links and the things they link together. The fiber is almost an afterthought, a means to an end. If you're at all interested in how the Internet came to penetrate our lives over the last two decades, you should check out Tubes.