The Arduino is a cool little development board, actually a series of them, that make it a snap to get up and running with embedded development. I've wanted to get my hands on one for awhile but I haven't really had an application. That is, I didn't until I saw this:

I found some time today to work on my quadrotor project some more. A few weeks ago I got one motor mounted and spinning, just using the RC receiver and trasmitter. Today, I mounted the motors and set up a little test program on the arduino to make them spin. Check it out:

Test program and more info after the fold.

After too many days of everything remindlyo I decided that today would be the day I finally got off my ass and finished putting together my quadrotor. There were a bunch of minor dramas that made me drop it for much too long, all detailed below the fold.

The new propellers came today. I ordered a pair of sets of 10x4.5 propellers from Amazon and promptly failed to get them to work with the motors. Turns out they're hard to mount! I ended up making a trip to the hardware store to pick up some O-rings, which are much more stable than the little rubber bands the motors came with. Here's what it looks like: Quick update on the quadrotor. I went through all of the motor wiring and found that the motors were hooked up to the wrong terminals! [This diagram][multiwii-diagram] plus watching the orientation of the machine on the configuration software helped me figure out where I had gone wrong. After that, I calibrated the throttle range on all of the speed controllers and then tried flying again.

Mounting a Magic Trackpad on a Kinesis Advantage Keyboard

Update: The Magic Trackpad 2 fits in the same spot but you might have to use a different sticky material. See these tweets for details.

Way back in early 2009 my wrists started acting up. As a professional software developer only two years into my young career, this was super concerning. I asked around at the office and my coworkers told me I should get a Kinesis Advantage Pro keyboard, which aside from being super goofy looking, seems to have cured a lot of people of their RSI symptoms. I looked into it and eventually broke down and bought one, and then another one because the first developed some sticky keys but I didn't want to part with it to send it back for service.

Using a mouse with the Kinesis is a little bit tiring, though. It's a much larger keyboard than you might be used to, so the reach from keyboard to mouse is in kind of a weird direction and your mouse might be in a weird spot. I've been using an Apple Magic Trackpad for the past few years and after awhile I got sick of the reach and stuck it in the obvious place, the giant blank spot between the keywells of the Kinesis, like so: 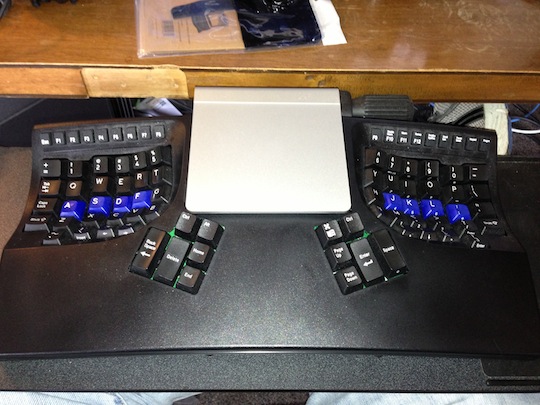